Quinn’s Undying Rose will be released around September 15th, but here’s a little excerpt: 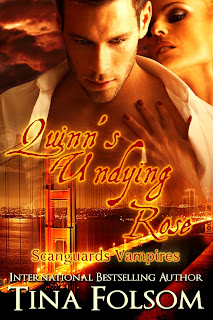 Quinn slunk into the passenger seat as Oliver took the driver’s seat of the SUV and started the engine.

“Wish you could stay longer,” Oliver said as he pulled onto the unlit country lane, leaving the house behind where the inner core of Scanguards had been celebrating yet another blood-bond.

Only vampires and their mates had been invited—well, and Oliver. Not to forget a few dogs: Zane had brought Z, and Samson and Delilah had brought their baby daughter Isabelle’s little puppy too. If they weren’t careful, Scanguards would turn into a circus.

“Gotta get back to New York. Besides, what would I do here? Watch how Zane makes puppy eyes at Portia the same way his dog does?” Quinn chuckled. “Better get out of here. Whatever’s going on here might be contagious.”

The human kid next to him gave him a sideways grin—yeah, he was a kid, barely in his mid-twenties, and while Quinn too looked rather young, he carried the experience and memories of two centuries on his shoulders. Two very long and lonely centuries, despite the fact that he’d never been alone and had always surrounded himself with the hottest pieces of ass available. But being surrounded by others hadn’t chased away the emptiness in his heart. He’d felt it physically tonight. Seeing so many of his friends happily tied to their blood-bonded mates had driven reality home once more.

“Like you would ever settle down,” Oliver claimed. “Hey man, the life you’re living—that’s what I want. Women left, right, and center. You’re doing it right.”

Quinn caught his admiring look and forced his usual charming smile onto his lips. He’d perfected it over the last two hundred years, and by now, even he couldn’t tell how fake it was. If that wasn’t an accomplishment in itself!

“Hey, kiddo, I just make it look easy. Being a playboy takes a lot of work—and energy.” He winked, forcing his thoughts about his past to retreat into the dark recesses of his mind.

Oliver burst out in laughter. “Right! I don’t mind that kind of work.” He wiggled his eyebrows in Groucho Marx fashion. “And energy I’ve got plenty of.”

“The young!” Quinn rolled his eyes. “No appreciation for the art of seduction. It takes skill and cunning to coax a woman into your bed.”

“It takes money, good looks, and a big dick!”

Quinn couldn’t help but chuckle. “Well, that certainly helps. But then of course that leaves you short on two things.”

Oliver turned his head away from the winding road ahead of him.

“ ‘Cause the looks you’ve got!” Quinn added.

His young colleague snorted, showing his outrage. “You haven’t seen my dick!”

“Yeah, and by the grace of God, I hope I never will.” Quinn laughed, unable to contain himself.

Oliver glared at him. “I have what it takes!”

“Whatever you say, kiddo!” His eyes started tearing, and he could barely get the words out without bursting into laughter.

“You don’t believe me? What? You think cause you’re a vampire and I’m not, I don’t have the equipment?”

Quinn shook his head. “I can’t believe we’re having this conversation.”

“Well, is that it? You think you’re better at it because you’re a vampire?”

Quinn decided not to let Oliver goad him into a comparison of their two species. With a grin on his face he winked at him. “Once you’ve been at it for as long as I have, I bet you’d be even better than me. I think you’d be a natural.”

A proud sheen of excitement radiated from Oliver’s eyes. “You really think that?”

“Sure I do. I’ve seen how girls look at you.” He ruffled his dark hair, which as usual stood in all directions as if he’d just gotten out of bed. “Of course at this point they all just want to tame your wild mane. But trust me, that’s an advantage: you reel them in with your innocent, cute-boy looks, and badabing-badaboom, you’ve got them in the sack.”

He looked so innocent and fresh-faced, Quinn felt his heart clench for a moment. He’d been like Oliver once: full of excitement for his life ahead. Full of hope. In love. And then he’d lost it all: his life, his hope, his love.

He cleared his throat, desperately trying to push down the rising memories and reached for the first words that came to him. “You should come visit me in New York. We can hang out and pick up some babes.”

“Really?” Oliver’s voice was full of awe as if he’d just been presented with the keys to a Lamborghini. “You mean that? Man! That’s awesome!”

Quinn sighed. Now he’d unleashed something in the kid that would last at least until they reached the airport, where a private Scanguards jet was waiting to take him to New York. Better that than wallowing in his own thoughts. And maybe a visit from Oliver would be fun. Jake, who was currently holding down the fort in the New York office of Scanguards, could join them, and the three of them could go hunting.

He could teach the kid a thing or two, just for the hell of it. When he was older, he would understand that it wasn’t about how many conquests he made, but who he conquered.

“Why don’t you talk to Samson and ask him to give you a couple of weeks off? I’m sure he’ll be okay with it. Now that Zane’s all domesticated, I really have nobody else to go partying with.”

Quinn howled. “You’ve got to be kidding me, Oliver! Nobody can be like Zane!”

“But I’m taking his place, aren’t I?” he hastened to repeat.

Quinn gave him a slap on the shoulder, secretly happy about the kid’s enthusiasm. Nevertheless, he couldn’t stop needling him. “Those are big shoes to fill. You’re up for that?”

“You say when and where, and I’m your man!” Oliver proclaimed, beaming at him.

Quinn nodded, his head turning sideways, when he perceived something in the corner of his eye. His head whipped toward the dark road in front of them. Shit!

“Oliver! Watch out!” he yelled.

Oliver’s head snapped to the obstacle in front of them: in their lane, cones cordoned off equipment for road work, resting there for the night, but the flashing lights that usually accompanied such blockages weren’t flashing—they appeared dim and barely recognizable in the dark night. To the right of it there was no outlet: a wall of rock rose next to the shoulder.

Just as Oliver yanked the steering wheel to the left to avoid the excavator, the light of another car speeding toward them, blinded them. In vampire speed, Quinn jerked the wheel back to the right, just as Oliver slammed on the brakes.

The tires screeched, and the back of the car fishtailed out. Loose gravel from the construction site suddenly made the tires spin without finding purchase. The car advanced, virtually unimpeded, heading straight for the excavator. Wildly turning the unresponsive steering wheel and pressing down the brakes, Oliver tried to avoid the inevitable. With a loud thud, the car crashed into the side of the small excavator, which toppled to its side. Only now, Quinn noticed the crane next to it.

The power of the impact deployed the airbags, but the windows blew out and with horror, Quinn saw how Oliver was thrown out of the car. He hadn’t worn his seat belt.

Quinn was held back by his own seat belt, the air bag suddenly obstructing his view.

He fumbled for the release of the belt and realized that it was jammed. He forced his fingers to turn into claws, but just as he sliced through the material, he heard a snapping sound and looked around him when he perceived a movement outside the passenger window. As he whirled his head to look through it, he saw a large plate of steel, suspended from the beam of the crane, swinging toward him.

He froze in mid-movement. Shit! There was no way out of this. The steel plate would decapitate him. It was over.

His life didn’t flash before him; maybe it wasn’t that way for vampires. Only one thought filled him now. He was finally going home.

With a last breath, he sighed.

Rose, we’ll be together again. Finally.

Then he felt the impact as the car got hit. He was knocked sideways, hitting the steering wheel to his left. All went black.